Each spring (even if it does not feel like spring outside) I celebrate Earth Day with a sale. I enjoy recycling books (that were headed mostly headed to a landfill) into new items! I also use other recycled items in my creations. Because of this I feel Earth Day is a fitting holiday for me to celebrate.

From Friday, April 20th – Monday, April 23rd you can use coupon code EARTHDAY10 to save 10% on your online order from my Etsy shop.

I will be posting fun Earth Day and recycling info all week long. If you want to learn more check out the Earth Day website https://www.earthday.org/earthday

Here is to hoping spring really is coming this year! 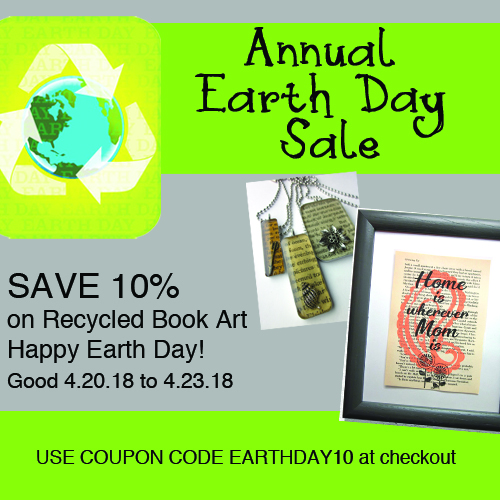 Each year I like to celebrate Earth Day with a week long sale! This year you will save 22% off your order by using coupon code EARTHDAY22 at checkout in my Etsy shop.

Every year I like to celebrate Earth Day with a sale in my Etsy shop! I love recycling stuff into new stuff and it just seems like Earth Day is the perfect holiday for me to celebrate.

This year the special will be 22% off your online Etsy order when you use the coupon code EARTHDAY22 at checkout. It is a great time to order a special Mother’s Day gift or plan ahead for end of the school year teacher gifts!

Speaking of my love for recycling things (and disassembling and reassembling) I am collecting makeup compacts… eyeshadow, blush etc for use in a new style of necklace I have been making, soooo if you have any to offer up please drop me a line at espartostudio@live.com.

Since many of you know that my favorite number is ELEVEN here are 11 fun facts about Earth Day that I found here https://www.dosomething.org/us/facts/11-facts-about-earth-day